Bregenz, December 13, 2019: Wolford AG, which is listed on the Vienna Stock Exchange, generated revenue of € 60.49 million in the first six months of the current financial year (May 2019 to April 2020), comprising a decrease of 3.0% from the comparable prior-year figure of € 62.37 million. Similar to fashion retailers across the globe, Wolford is suffering the consequences of a far-reaching structural transformation along with declining customer frequencies in the Western European fashion markets. Operating earnings (EBIT) in the first half-year amounted to € -9.38 million, compared to € -5.92 million in the previous year. This development is primarily related to the drop in revenue. Interest payments roses substantially by € 1.60 million, which is mainly due to the first-time application of the new accounting standards IFRS 16. Accordingly, earnings before tax equaled € -12.03 million, down from € -6.61 million in the prior-year period. Earnings after tax totaled € -11.86 million compared to € -7.33 million in the first half of the previous financial year.

Within the context of further reduction of administrative staff in Bregenz in the 2018/19 financial year, the average number of employees (FTE) in the first six months was down by 68 to the current total of 1,282 employees (previous year’s average: 1,350 employees (FTE)). Accordingly, personnel expenses fell by € 0.89 million compared to the first half of 2018/19 to € 30.27 million. Depreciation and amortization in the first half of the current financial year climbed from € 3.63 million to € 9.22 million as a result of the initial application of IFRS 16.

The new Management Board team consisting of Silvia Azzali and Andrew Thorndike, which has only been in office since a few weeks, is currently working with company executives to precisely analyze the situation and on this basis develop a master plan for Wolford consisting of short-, medium- and long-term measures. The target is to achieve a sustainable repositioning of Wolford as a profitable company with strong product lines and a clear customer orientation. At the same time, the goal is to adjust costs in line with revenue development.

It goes without saying that the company is examining the viability of some individual boutique locations. On the other hand, Wolford’s presence should be expanded in markets where there is a demonstrable growth potential, predominantly with the help of wholesale partners. For example, Wolford is now represented on the Japanese market again for the first time after an absence of several years. There were further important openings of partner boutiques in the EMEA region i.e. in Istanbul, Prague and Belgrade. In the Chinese growth market, Wolford opened three new partner boutiques on the Chinese mainland during the first half of the current financial year. Furthermore, Wolford is making targeted investments in omni-channel sales. Accordingly, Wolford recently began to cooperate with the luxury fashion platform Farfetch, one of the world’s most important online shippers of luxury fashion. The first pilot project with the Wolford boutique in Milan led to a revenue increase of about 30% within a three-week period, including many orders from countries in which Wolford has hardly been active up until now, for example Saudi Arabia and Hungary.

The management has identified considerable cost-saving potential along the value chain, including purchasing. Wolford centralized its purchasing process within a single management structure over the last few weeks and has developed specific cost-reduction measures in cooperation with the new Head of Purchasing and his team which are already being implemented.

On the basis of the current analysis of all relevant areas in the company, the new Management Board team will develop a plan to reposition Wolford AG encompassing short-, medium- and long-term measures. On the basis of the latest findings, the management confirms its previous plans to return Wolford to profitability in the 2020/21 financial year. 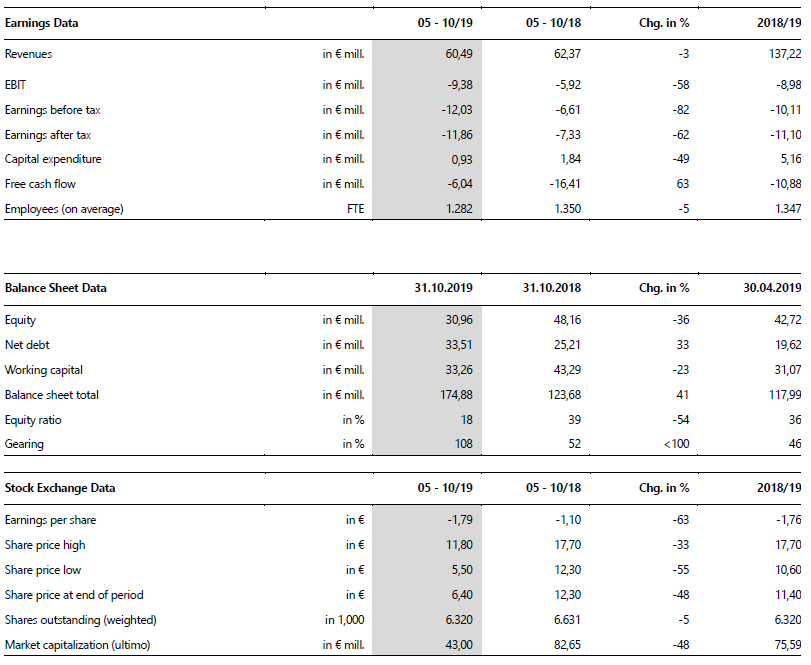