Vienna/Bregenz, December 6, 2017. Wolford AG, which is listed on the Vienna Stock Exchange, succeeded in stabilizing its revenue and reducing operating losses in the first half of the current 2017/18 financial year. In the period May to October 2017, revenue rose 3.7% to  70.15 million (previous year:  67.62 million). Second-quarter revenue was up 3.0% to  41.06 million. Adjusted to take account of currency effects (especially the decrease in value of the British pound and the US dollar), the rise in revenue equaled 4.7% over the entire first half-year. Operating earnings (EBIT) improved to  -6.18 million from the prior-year level of  -7.86 million as a result of the revenue increase and declining fixed costs. Wolford generated a positive EBIT of  1.04 million in the second quarter. Earnings after tax totaled  -6.62 million in the first half-year compared to  -8.07 million in the previous year.

Revenue of the online business up 33%

Following the revenue decline related to planning mistakes in the previous year, revenue in the first half of 2017/18 stabilized, both with respect to Wolfords own retail operations as well as its wholesale business. Wolford-owned retail stores showed an increase of 1.9% or  0,72 million, whereas the wholesale segment grew slightly by 1.2% or  0.29 million. Revenue of the companys own online business was up significantly by 32.6%, comprising a year-on-year increase of  1.62 million, which can be attributed to successful marketing campaigns and improved profit availability once again.

Restructuring measures are having an increasingly positive impact. In particular, a sustainable drop of  3.66 million in personnel expenses was achieved, down to  34.47 million in the first half-year. The average number of employees (full-time equivalents) in the first half of 2017/18 fell by 82 to 1,476 employees due to the reduction of administrative positions in European sales regions as well as the streamlining of administrative staff in Bregenz. Second-quarter personnel expenses alone were down  2.28 million to  17.03 million. This was reflected in positive operating earnings of  1.04 million in the second quarter despite high non-recurring restructuring expenses.

Bridge loan repaid ahead of schedule

Wolford only had to use half of the bridge loan of  10 million granted by the banks in July 2017 to secure its peak seasonal liquidity requirements, and already completely paid back the loan in the months of October and November 2017.

Additional measures to sustainably reduce costs are in preparation. At the same time, the company is investing in laying the foundation for future revenue growth. Wolford strengthened its technical base in the online business and hired three new online specialists who are mainly active in the front-end segment with close customer proximity. The marketing budget was also restructured to systematically enhance the performance of its online business. Last but not least, our company filled the vacant positions of chief designer and director brand and marketing. This sets the conditions to the redirection and positive development of the brand and the company. 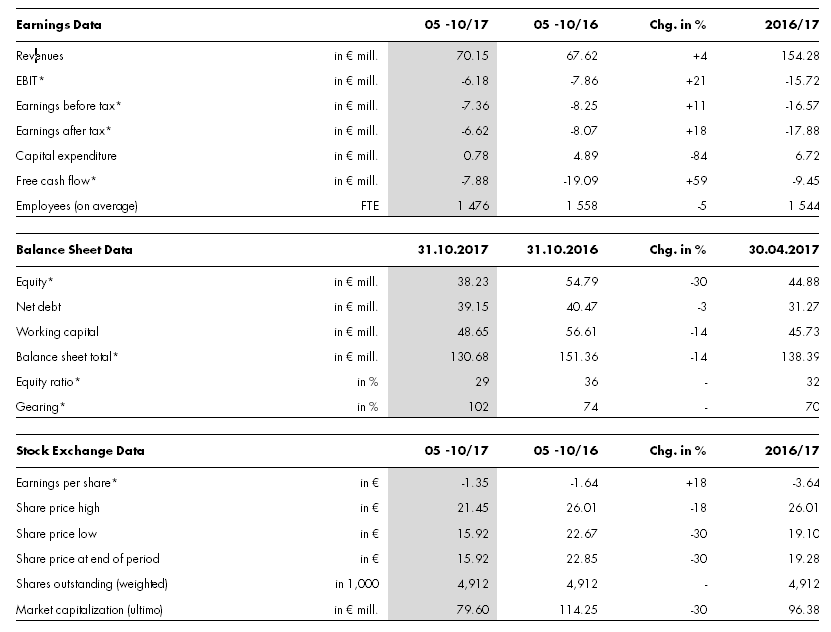