Skip to content
Home/Wolford AG: Detailed Figures Presented for the First Half of 2016/17

Wolford AG: Detailed Figures Presented for the First Half of 2016/17

 Third quarter begins with slight upswing in revenues in November

Vienna/Bregenz, December 16, 2016: Wolford AG, which is listed on the Vienna Stock Exchange, generated revenues of  67.62 million in the first half of the current financial year (May 2016 to October 2016), comprising a year-on-year decline of 14.7%. The drop in revenue equaled 13.1% when adjusted for currency effects, in particular the decrease in value of the British pound. As a consequence of weaker customer frequency and a delivery date shifted to the next quarterly period, second-quarter revenues were down 11.9% to  39.88 million. Operating results (EBIT) in the second quarter only turned slightly positive to  0.03 million. Against the backdrop of the substantial loss generated in the first quarter, EBIT in the first six months of the current financial year amounted to  -8.24 million (previous year:  -0.28 million).

A substantial portion of the revenue decline of  11.62 million in the first six months of the 2016/17 financial year can be attributed to the development of the wholesale business. As a consequence of the delay in a delivery date for the fall/winter collection, first quarter figures did not include revenues from so-called pre-season orders to the amount of  3.19 million. Up until now Wolford has only succeeded in partly compensating for the revenue shortfall. In addition, Wolford delayed another delivery date for this collection to be closer to the Christmas season and thus to the third quarter, so that second-quarter revenues were also down by about  3 million from the prior-year level. On balance, revenues of the wholesale segment fell by 20% in the first half-year.

However, Wolford-owned retail stores also reported a perceptible 12% drop in revenues, not least due to the lack of customer frequency in the boutiques, which other clothing retailers also suffered from. The garment sector in important European core markets was sluggish in August and September 2016. For example, sales on the German fashion market were down by 3% in August in a year-on-year comparison, and even fell by more than 12 % in September.

Negative EBIT and earnings before tax

The financial result at  -0.40 million represents an improvement from the prior-year figure of

 -0.51 million, which can be particularly attributed to the positive valuation effects on financial assets. Against the backdrop described above, earnings before tax in the first half-year totaled

Slight upswing in revenues in November

Wolford succeeded in breaking the downward revenue trend in November 2016, and achieved slight growth once again in its own retail stores on a like-for-like basis. The third-quarter recovery is even more pronounced in the wholesale business. Here Wolford will partly be able to compensate for the revenue drop in the first half of 2016/17 after delaying the last delivery date for this years fall/winter fashion collection to the beginning of November and thus to the third quarter. This was designed to ensure that the products would be newly on display at the point of sale at an optimal time.

Most recently Wolford predicted a slight drop in revenues and negative operating earnings in the low single-digit range for the current financial year. The ongoing program of measures designed to sustainably increase revenues and profitability should show initial positive cost effects in the second half of the financial year, whereas a large part of the restructuring expenses was reported in the first six-month period. Nevertheless, it will be a challenge to attain the communicated business targets in the light of the companys revenue development in the first half of 2016/17. The third-quarter revenue development will be the decisive factor in this regard.

The Half-Year Report 2016/17 can be viewed and downloaded in the Investor Relations section of the companys Website at company.wolford.com: 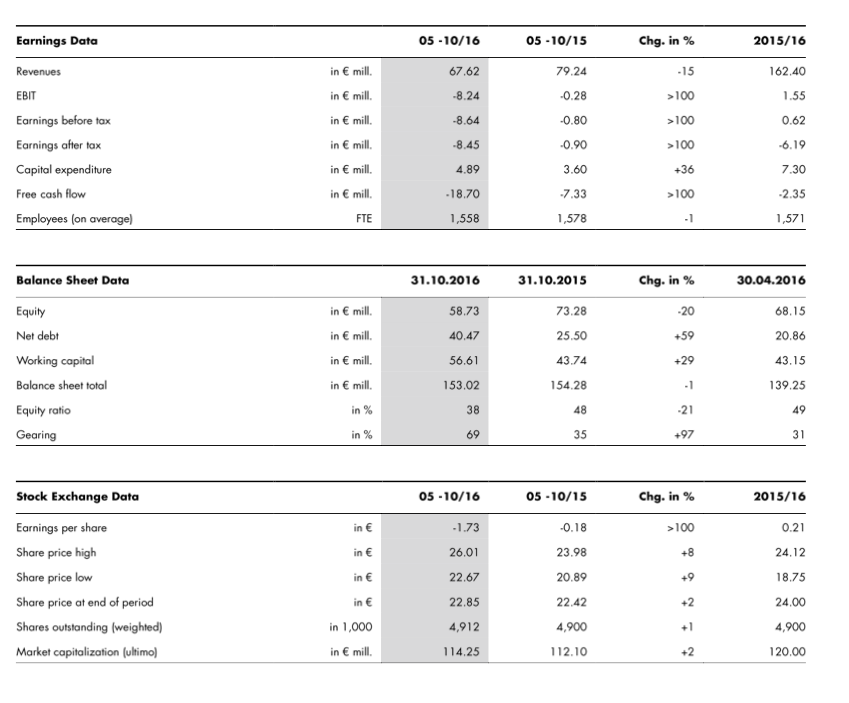 Wolford AG, which has its headquarters in Bregenz on Lake Constance (Austria), has 16 subsidiaries and markets its products in more than 60 countries via 262 mono-brand points of sales (company-owned and partner-operated), around 3,000 distribution partners, and online. Listed on the Vienna Stock Exchange since 1995, in the 2015/16 financial year (May 1, 2015  April 30, 2016) the company had around 1,570 employees and generated revenues of  162.4 million. Founded in 1950, Wolford has since grown to become the leading global brand for luxurious legwear, exclusive lingerie, and high-quality bodywear.